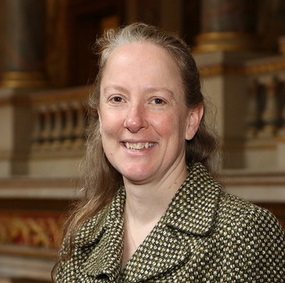 Samantha Job became the Director for Defence and International Security at the Foreign, Commonwealth & Development Office (FCDO) in March 2019. Samantha has been a career foreign service officer since 1992. She has worked on geographical issues from South East Asia to the Middle East and thematic issues from war crimes to how to use social media in foreign policy. A theme of her career has been security policy, where she has led policy formulation on counter-proliferation, EU Security and Defence Policy and counter terrorism. Her work has taken her to Thailand and the UK’s Mission to the UN in New York, where she was the counter terrorism and counter proliferation specialist. From 2013 to 2015, Samantha was the joint Head of the North Africa Department in the FCDO in London. From 2016 to early 2019, Samantha was the Foreign and Security Policy Counsellor at the British Embassy, Washington, engaging with the US government across all aspects of national security policy. Samantha is a strong supporter of diversity and inclusion, and is the National Security Council’s (NSC) gender champion.