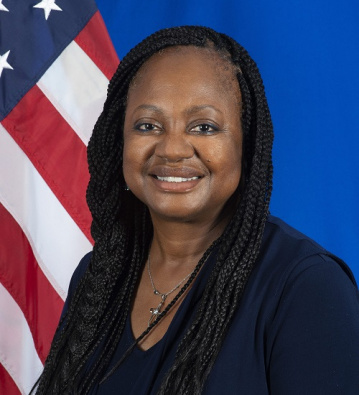 Under Secretary, Arms Control and International Security, US State Department

Ambassador Bonnie Denise Jenkins, PhD has served as the Under Secretary for Arms Control and International Security since July 22, 2021. She previously served in the Obama Administration as Special Envoy and Coordinator for Threat Reduction Programs in the Bureau of International Security and Nonproliferation (ISN) from July 2009 until January 2017. Ambassador Jenkins coordinated U.S. efforts on threat reduction globally and U.S. government programs in chemical, biological, nuclear, and radiological (CBRN) security. She was the State Department lead for all four of the Nuclear Security Summits held from 2010 to 2016, as well as the U.S. Representative to the G7 Global Partnership Against the Spread of Weapons and Materials of Mass Destruction. Before serving as Coordinator, she was a Legal Adviser to the U.S. Arms Control and Disarmament Agency where she provided advice to U.S. ambassadors and delegations negotiating arms control and nonproliferation treaties. Ambassador Jenkins also provided legal advice to treaty implementation bodies including the Chemical Weapons Convention, the Comprehensive Nuclear Test Ban Treaty, the Open Skies Treaty, the Conventional Forces in Europe Treaty, and the Biological Weapons Convention (BWC). She has worked with international institutions such as the International Atomic Energy Agency, the World Health Organization, the Organization for the Prohibition of Chemical Weapons, the Office of Security and Cooperation in Europe, the Comprehensive Nuclear-Test-Ban Treaty Organization, Interpol, and the BWC Implementation Support Unit.

From 2014 to 2017, Ambassador Jenkins led diplomatic efforts to promote the Global Health Security Agenda, a group of 70 countries, international organizations, non-government organizations, and private sector companies that builds countries’ capacity to prevent, detect, and respond to infectious disease threats like Ebola and Zika. She also dedicated significant attention to the engagement with Africa to counter CBRN threats. In partnership with the U.S. Defense Threat Reduction Agency and U.S. Africa Command she developed the Threat Reduction in Africa program to help ensure that U.S. programs and activities in CBRN security were well coordinated and met the needs of African partners.

For her service as Coordinator of Threat Reduction Programs, Ambassador Jenkins was the 2016 ISN Nominee for the Secretary’s Award for Excellence in International Security Affairs. Prior to re-joining the government in 2009, Jenkins worked at the Ford Foundation as the Program Officer for US Foreign and Security Policy, and Conflicts. She also served as Counsel on the National Commission on Terrorist Attacks Upon the United States (9/11 Commission). She was the lead staff member conducting research, interviews, and preparing commission reports on counterterrorism policies in the Office of the Secretary of Defense and on U.S. military plans targeting al Qaeda before 9/11. Ambassador Jenkins served as General Counsel to the U.S. Commission to Assess the Organization of the Federal Government to Combat the Proliferation of Weapons of Mass Destruction and worked at Rand Corporation focusing on Middle East weapons of mass destruction issues.

From its inception in 2017 until April 2021, Ambassador Jenkins was the Founder, Executive Director, and Board Chair of Women of Color Advancing Peace and Security (WCAPS), a leading advocacy organization supporting women of color in the security and peace-building sector that believes global issues are best approached from a variety of perspectives. In June 2020, she also founded Organizations in Solidarity, which supports a common vision of a world where all people are treated equally, fairly, and with respect.

From 2017 to 2020, Ambassador Jenkins was a Nonresident Senior Fellow at Brookings Institution. In 2017 she was a Senior Fellow at the Perry World House at the University of Pennsylvania. She was a pre-doctoral fellow at the Belfer Center for Science and International Affairs at the John F. Kennedy School of Government, Harvard University. During her years at the Belfer Center she worked at Harvard Law School in the Bernard Koteen Office of Public Interest Advising as an advisor to law students on legal jobs in the public sector. Ambassador Jenkins has a Ph.D. in International Relations from the University of Virginia; an LL.M. in International and Comparative Law from the Georgetown University Law Center; an M.P.A. from the State University of New York at Albany; a J.D. from Albany Law School; and a B.A. from Amherst College. She also attended The Hague Academy for International Law. Jenkins is a retired U.S. Naval Reserve Officer and received numerous awards for her military service. She is a member of the New York State Bar.